No place to go back 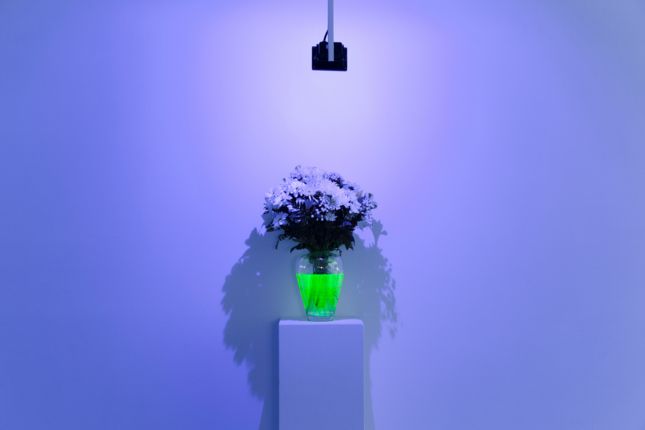 From September 21 to November 5
Curated by Iñaki Chávarri

What do you do when your world starts to fall apart?
Anna Lowenhaupt Tsing¹

We are constantly bombarded with news announcing our arrival at a point of no return as a species and that, if we do not radically change the way we live, our days will be numbered. The way we relate to the environment is not sustainable and solutions have been sought from different disciplines. We will fail as a species if we fail to reverse the effects generated in recent centuries.

There are not a few ecological positions in the world of contemporary art that include words like origin and balance to refer to a past that enjoyed a supposedly idyllic state. However, both terms seem more like projections of our desires than realities of the History we know. The same happens when we try to find answers to environmental problems in concepts like purity, which turns out to be synonymous with words such as innocence, virginity, cleanliness, or chastity, all of them connected, at least in the West, with the mirror of morality.

However, if we go into definitions closer to biology, we see that life is the result of a countless number of mixtures, interactions, and mutations, that is, of a permanent process of contamination. Therefore, going back to the origin or seeking purity does not seem to be the right vehicle to understand the current ecological situation.

If then these concepts are not the ones that can give us assertive answers on the subject and, on the contrary, it is pollution as a process and not as a factor which has determined our existence on the planet, can we build new spaces of thought from the polluted state of things? Should we approach it as a path that allows us to understand and find better answers towards possible futures?

The practices of the artists participating in this exhibition negotiate with the idea of contamination from different places and create a network of crossed affections in space that allows us to approach the complexity of the environmental problem without falling into the commonplace of nostalgia.

In this exhibition water and milk appear in many ways, they do not appear as we are used to. The philosopher Michael Marder asserts in his book Dump Philosophy that to think about the earth today we must redefine its basic elements, for example:

The image of water that automatically forms in the mind of a person hearing the word rarely includes plastic debris, cadmium, mercury, lead, coliform bacteria, and petroleum hydrocarbons. Thinking of air, we do not usually associate it with sulfur dioxide, nitrogen oxides, and particulate matter from forest fires or coal-powered factories.³

The Scottish artist Kari Roberson brings us closer with her work recuerdos materiales / legados líquidos to the categorical conflicts resulting from understanding our species as something different from the rest of life forms. Her proposal for the exhibition is a closed rainwater circuit, where the liquid erodes a series of plaster objects as it passes through them. These structures crossed by water lead us to think of ourselves as aquatic architectures, without individual forms and with shared problems in complex relationships of crossed contamination. Another layer that shapes this piece is the dilemma of breastfeeding as through milk the mother provides the baby with both the nutrients necessary for his/her survival but also the polluting elements of the environment and the pharmacological history of the adult.

Three videos by Mariana Murcia share the patio with Kari's piece. A series of interspecies analogies that helps us to think about the world from anatomies different from ours. From the practice of immersion in icy waters that began in Iceland, Mariana explores from her own corporality and the limits of it our way of inhabiting the world. She approaches a type of crab that lives in those waters, and, from its floating qualities and exoskeleton, she proposes an exercise of radical empathy that overflows the notions of what we understand by community.

We have eyelids to block sight, however, it is more difficult for us to avoid sound, sometimes we can feel how the waves hit our body. Juan Pablo Pacheco Bejarano reveals certain underwater realities to demystify the supposed immateriality of the Internet through a sound installation. About 95% of the information that navigates on the planet is through transoceanic cables. They have been installed on the seabed since 1858, so Pacheco's question becomes relevant: how do technological ruins become part of the ecosystem of the ocean floor? This two-channel sound installation (a soundscape in the room and a performative conference in the headphones) shows us how our actions are intertwined with those of many other species and how our existence is a continuous construction from the collective ruins.

As for José Sanín, he approaches the devastated as a foundational element of life in his work Estos tiempos que aprietan. He gathers powdery debris like ashes or dead skin and, using casein⁴ as a binder, sticks it together to build a wall. This room divider alludes to the great marble of the German pavilion at the 1929 Barcelona International Exhibition designed by Mies Van Der Rohe and Lilly Reich. In a shameless substitution of marble for pulverized waste, José distorts the elegance of the principles of modernity from the constructive economy of his practice and the precariousness of our times. Also, the intersection between waste and milk protein shows the permanent tension between the living and the non-living, the present and the past.

Within the exhibition there is another exhibition, entitled Esfinge – esfínter, made up of pieces by Juan Guillermo Tamayo, Jimena Kato, and the Mazenett Quiroga collective. This small room works as an appendix to the main space: a dark place only illuminated by ultraviolet light (the kind that makes some colors look fluorescent). Above the entrance is written the play on words Sphinx - sphincter in the same way that the phrase Know thyself was written on the temple of Apollo. Both words share the same Greek root sphinx⁵ which means to contract, the first one refers to the mythical creature that protects the pyramid, and the other one to the last ring-shaped muscle that hides the mystery of our desire regardless of gender.

Juan Guillermo Tamayo's work El espíritu del tigre y el soldado pays a slight homage to the film Tropical Malady⁶ (both are resolved with great austerity and precision). The installation shows a tiger costume hanging on a branch, it seems that the animal has come home exhausted after a long day at work and has reluctantly dropped his uniform on the rack. This piece, installed at the entrance to the appendix, functions as a hinge between two worlds and warns us of a threshold that we are about to cross. It insinuates a change of skin, a change of form, although we do not access the causes of the event.

The Mazenett Quiroga collective proposes a painting entitled Night vision that represents a fragment of the Amazon jungle painted with photoluminescent pigments on camouflage fabric. Both incarnations of the vegetal—the first, typical of some animal species and appropriated by the armies to hide, and the second, in relation to the Western History of landscape—move our anthropocentric gazes towards ways of seeing under other spectra of light.

Jimena Kato approaches her family tree through floral decoration: she recovers a video that her mother recorded in the eighties where she teaches how to make flower arrangements from the Japanese tradition of ikebana. The video is accompanied by a sculpture of a vase with local flowers made by the artist in a western style. Kato reflects on the karmic debt she owes to the women of her lineage and seeks to know it through these symbolic actions. The artist pours fluorescent pigments into the water of the vase and inverts the colors in her mother's video: like Mazenett Quiroga, Kato makes the invisible visible and insists that things are more than what we see of them.

We cannot forget that modernity also modeled very exclusive ideals in relation to the body from heteronormativity. The non-binary artist Edi Jiménez invites us to review what can be left out of those margins with her mural La mostra, a symbolic self-portrait where they are represented as multiple animals that are popularly related to fatness. They appropriate the insult with tenderness to break these normative canons regarding the shape of the body, but also its gender. Although we see some animals on top of others, we also find a partially human, partially animal anatomy that embodies the feminine and the masculine. Edi paints the mural at the back of the room with the same purpose as the altarpiece in the church: to teach through images.

Continuing with the simile of the church, the installation by the Majorcan artist Julià Pandès occupies the space of the altar. It is made up of a series of anthropomorphic sculptures with the title Ofrendas (Offerings in English). These bodies inhabit the space as one more spectator would do when visiting the exhibition, they are temporary entities that are passing through. Just as we are and everything around us. In its materialities, the mystique of the gift—the offerings are made to the gods we venerate—contrasts with the mundane nature of the materials that make up the pieces: a bunch of useless elements for others (such as clothes, keyrings, keys and other waste that are the result of his own life as bottles of water or mango seeds) that Julià randomly finds on his long walks through the center of Bogotá. These bodies appear as a symbol of a civilization in crisis, as Enrique Juncosa says when talking about Julià's works: "they are monuments to the ephemeral, to the useless, to the residual, to the decline of a productive system"⁷  and even in this context of discouragement carry optimism.

¹Tsing, Anna Lowenhaupt. The Mushroom at the End of the World: On the Possibility of Life in Capitalist Ruins. Princeton University Press. USA. 2016.

²This title refers to the book Hypersea: Life on land by Mark A. McMenamin and Dianna L. Schulte McMenamin.
The authors describe how life moved from the sea to the land more than 400 million years ago and the survival of plants and animals since then is completely compromised by maintaining their hydration levels, therefore they propose that we are still part of a large body of water along with the rest of the plants, animals and other watery entities on the planet.

⁴ Casein is the main protein in milk that, when extracted and dehydrated, becomes a substance with high adhesive qualities. For millennia it has been used as a binder for painting on stones, walls, paper, and fabric.

⁵ I discovered this relation of terms that José Lezama made in his book Diarios through the book by Sáez, Javier and Carrascosa, Sejo. Por el culo. Políticas anales (Egales, Spain, 2011, p. 37).

⁷ Fragment of the text by Enrique Juncosa for the exhibition Teoría de la alegría at the Museum of Contemporary Art in Ibiza, Spain, 2020. 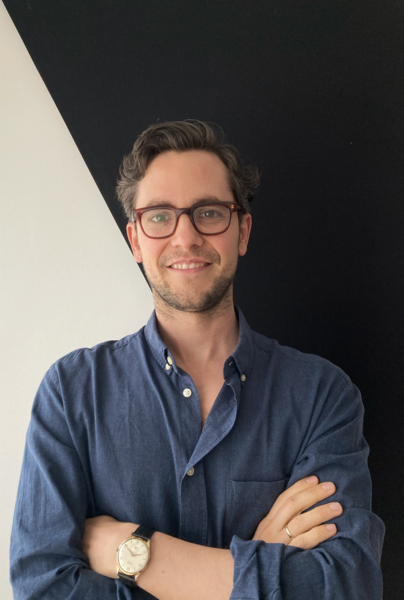 Graduated in Fine Arts from the Universidad Complutense de Madrid and SAIC (School of the Art Institute of Chicago). He has carried out multiple artist-in-residence programs including Mino AIR (Japan), KulttuuriKauppila (Finland) and Flora ars+natura (Colombia). In Spain she has exhibited in different galleries and independent spaces, and has developed training and curatorial projects with institutions such as MNCARS and Matadero Madrid, and has been part of several collectives and associations in the local context. His artistic practice, which also involves university teaching, is concerned with highlighting the fragility of our species and our structures of knowledge in the current context of ecological crisis. This is manifested in drawings and installations that are the result of an affective negotiation with the environment. 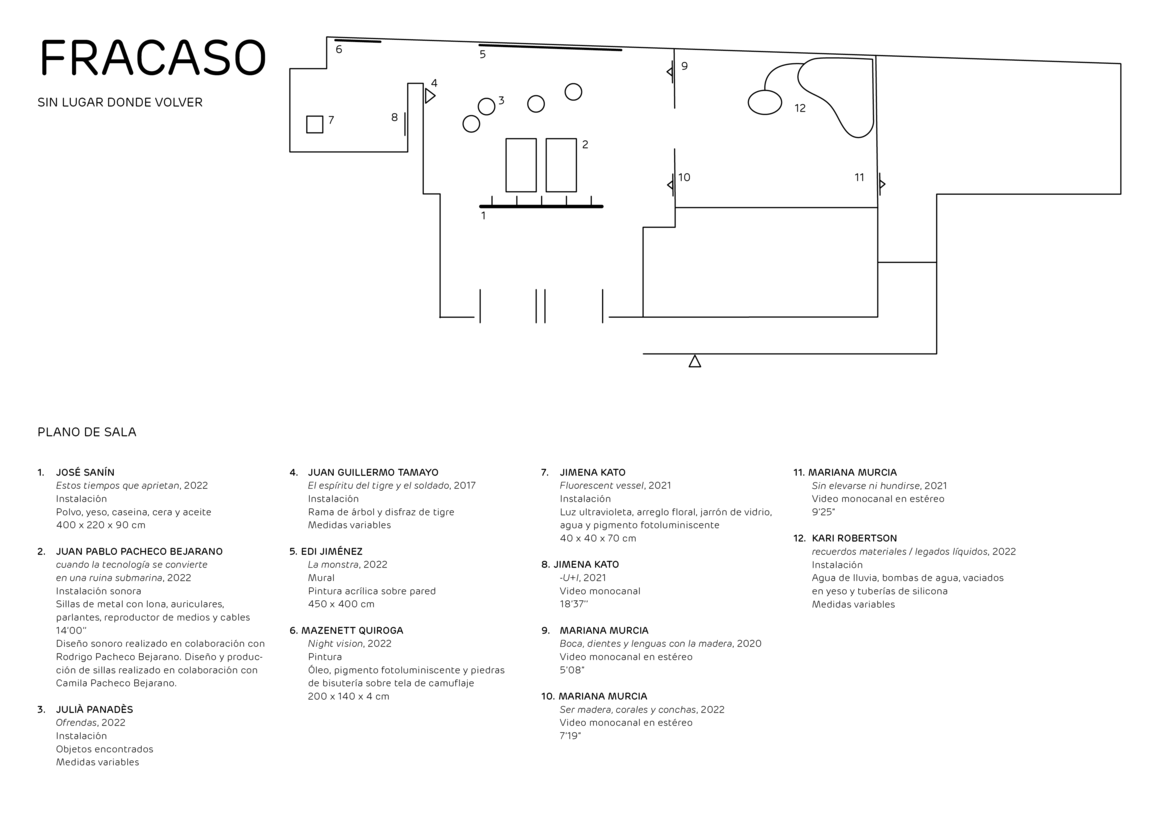 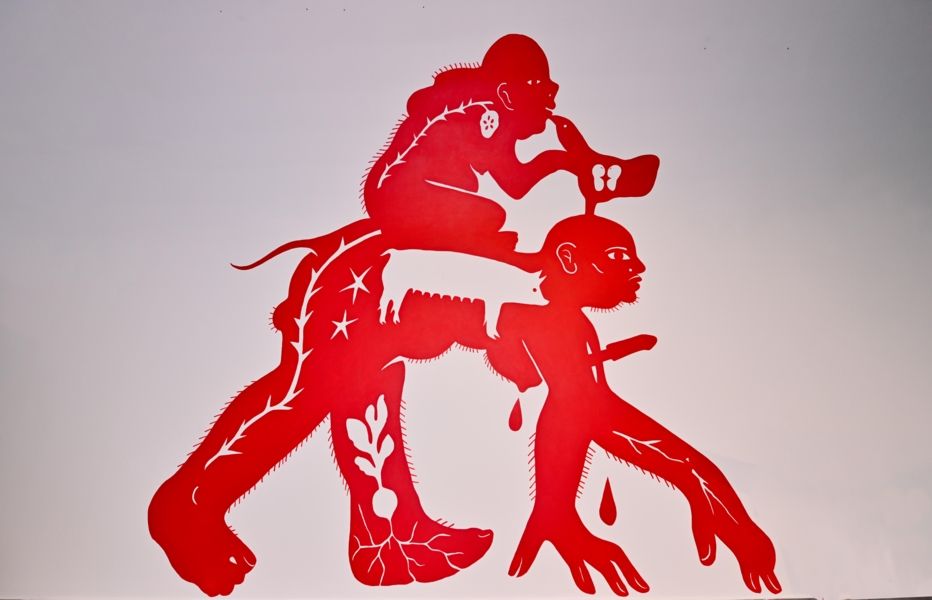 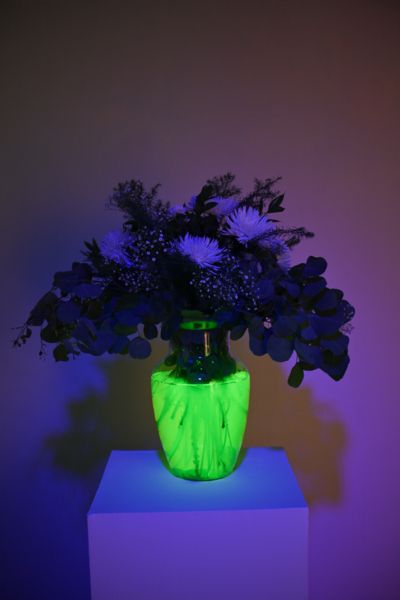 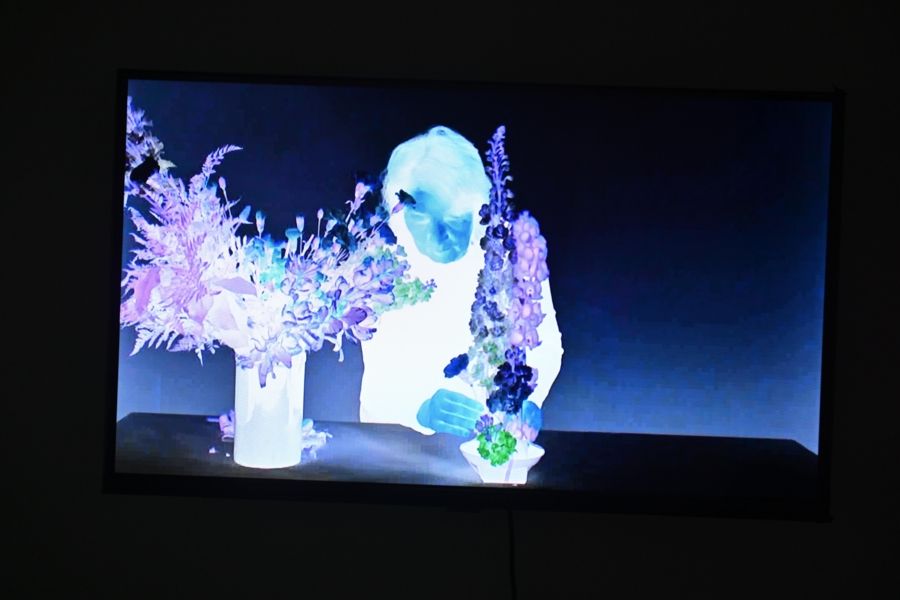 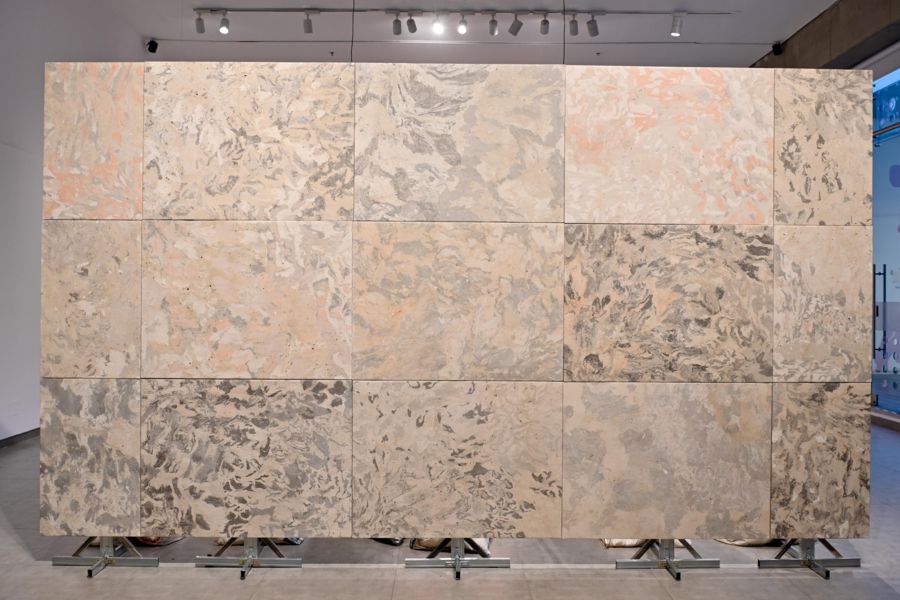 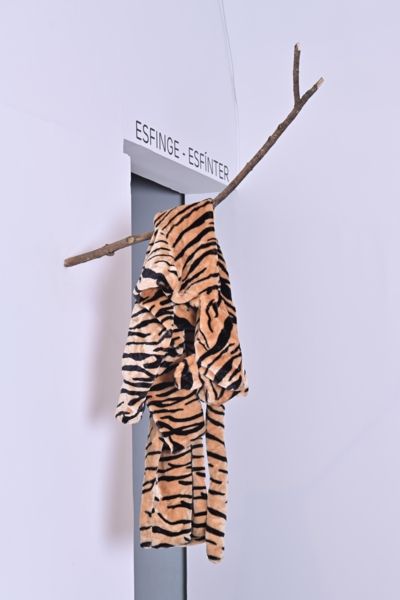 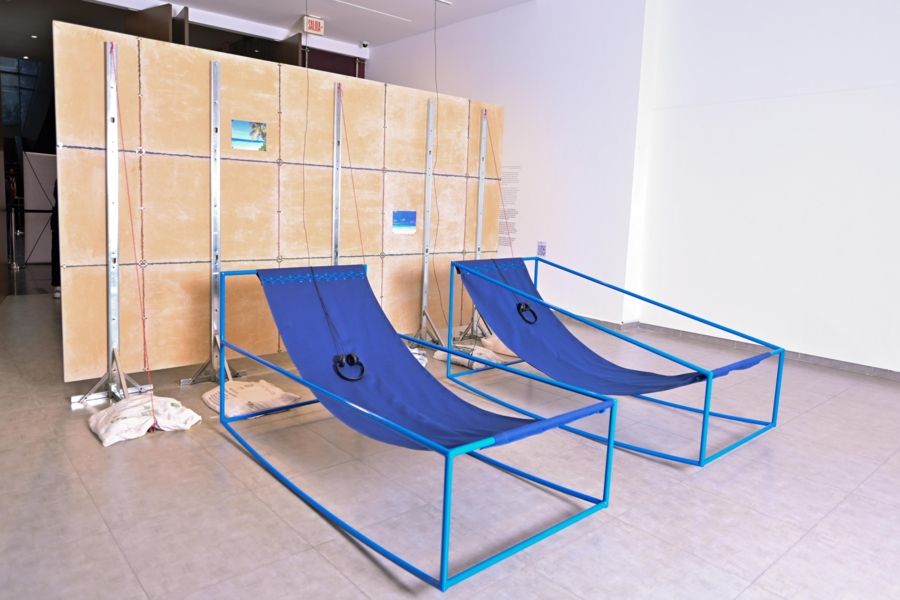 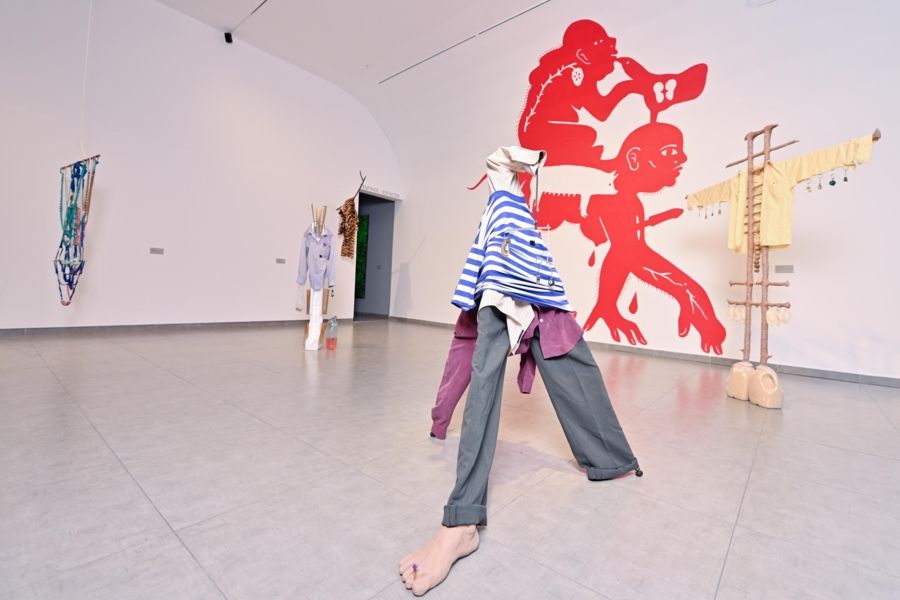 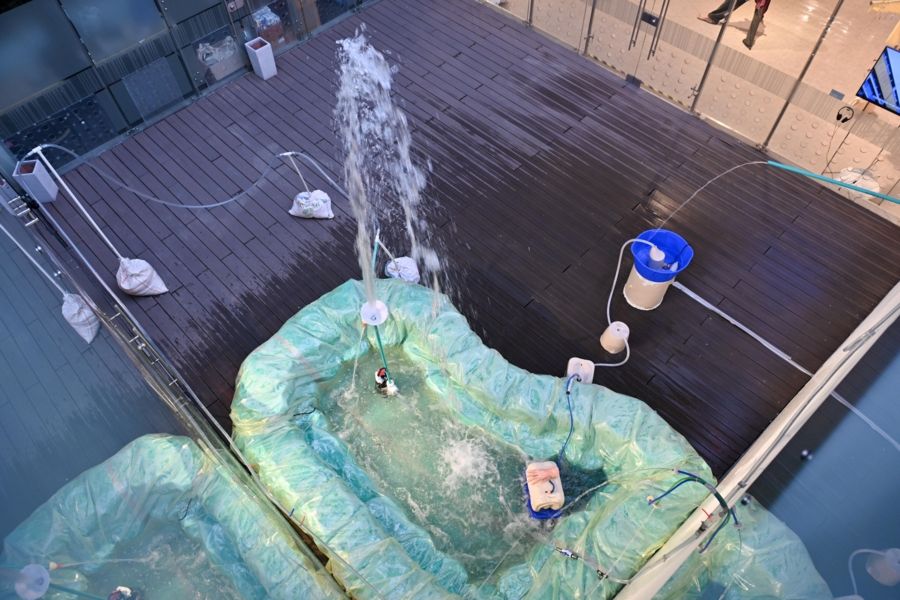 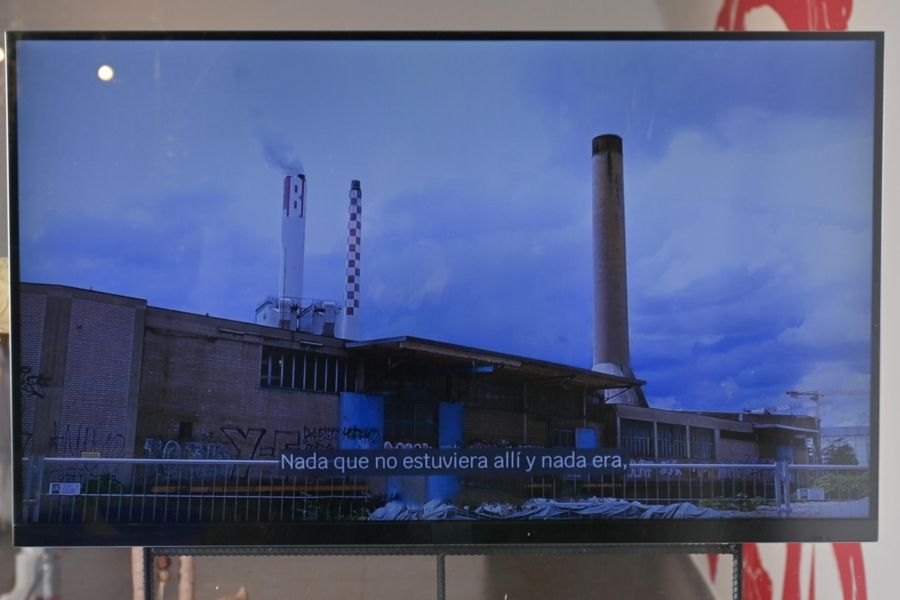 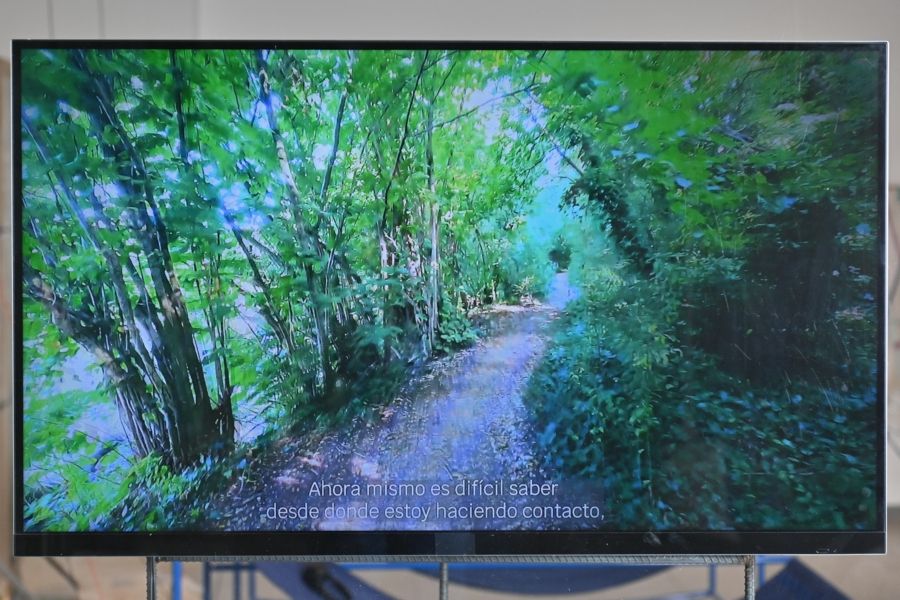 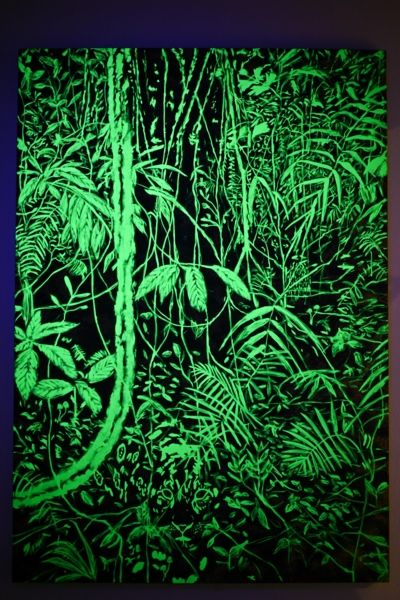